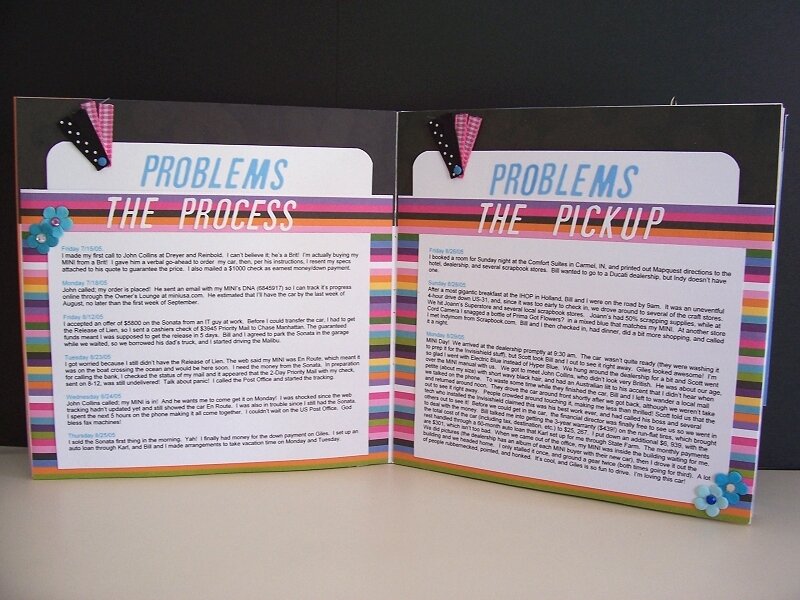 The Process and The Pickup

Specing a car on the internet and picking it up in a different state is an involved process, to say the least. I had a ton of related problems, big and small, which I knew I wanted to include. So I made large pockets and summed up the process on the outside, then added separate sheets inside the pockets that are just about the problems.

The journaling for The Process reads:
Friday 7/15/05.
I made my first call to John Collins at Dreyer and Reinbold. I cant believe it; hes a Brit! Im actually buying my MINI from a Brit! I gave him a verbal go-ahead to order my car, then, per his instructions, I resent my specs attached to his quote to guarantee the price. I also mailed a $1000 check as earnest money/down payment.

Monday 7/18/05
John called; my order is placed! He sent an email with my MINIs DNA (6845917) so I can track its progress online through the Owners Lounge at miniusa.com. He estimated that Ill have the car by the last week of August, no later than the first week of September.

Friday 8/12/05
I accepted an offer of $5800 on the Sonata from an IT guy at work. Before I could transfer the car, I had to get the Release of Lien, so I sent a cashiers check of $3945 Priority Mail to Chase Manhattan. The guaranteed funds meant I was supposed to get the release in 5 days. Bill and I agreed to park the Sonata in the garage while we waited, so we borrowed his dads truck, and I started driving the Malibu.

Tuesday 8/23/05
I got worried because I still didnt have the Release of Lien. The web said my MINI was En Route, which meant it was on the boat crossing the ocean and would be here soon. I need the money from the Sonata. In preparation for calling the bank, I checked the status of my mail and it appeared that the 2-Day Priority Mail with my check, sent on 8-12, was still undelivered! Talk about panic! I called the Post Office and started the tracking.

Wednesday 8/24/05
John Collins called; my MINI is in! And he wants me to come get it on Monday! I was shocked since the web tracking hadnt updated yet and still showed the car En Route. I was also in trouble since I still had the Sonata. I spent the next 5 hours on the phone making it all come together. I couldnt wait on the US Post Office. God bless fax machines!

Thursday 8/25/05
I sold the Sonata first thing in the morning. Yah! I finally had money for the down payment on Giles. I set up an auto loan through Karl, and Bill and I made arrangements to take vacation time on Monday and Tuesday.

The journaling for The Pickup reads:
Friday 8/26/05
I booked a room for Sunday night at the Comfort Suites in Carmel, IN, and printed out Mapquest directions to the hotel, dealership, and several scrapbook stores. Bill wanted to go to a Ducati dealership, but Indy doesnt have one.

Sunday 8/28/05
After a most gigantic breakfast at the IHOP in Holland, Bill and I were on the road by 9am. It was an uneventful 4-hour drive down US-31, and, since it was too early to check in, we drove around to several of the craft stores. We hit Joanns Superstore and several local scrapbook stores. Joanns had 50% scrapping supplies, while at Cord Camera I snagged a bottle of Prima Got Flowers? in a mixed blue that matches my MINI. At another store I met Indymom from Scrapbook.com. Bill and I then checked in, had dinner, did a bit more shopping, and called it a night.

Monday 8/29/05
MINI Day! We arrived at the dealership promptly at 9:30 am. The car wasnt quite ready (they were washing it to prep it for the Invisishield stuff), but Scott took Bill and I out to see it right away. Giles looked awesome! Im so glad I went with Electric Blue instead of Hyper Blue. We hung around the dealership for a bit and Scott went over the MINI manual with us. We got to meet John Collins, who didnt look very British. He was about our age, petite (about my size) with short wavy black hair, and had an Australian lilt to his accent that I didnt hear when we talked on the phone. To waste some time while they finished the car, Bill and I left to wander a local mall and returned around noon. They drove the car around front shortly after we got back, although we werent take out to see it right away. People crowded around touching it, making me less than thrilled! Scott told us that the tech who installed the Invisishield claimed this was his best work ever, and had called his boss and several others out to see it! Before we could get in the car, the financial director was finally free to see us so we went in to deal with the money. Bill talked me into getting the 3-year warranty ($439!) on the run-flat tires, which brought the total cost of the car (including tax, destination, etc.) to $25, 267. I put down an additional $6, 939, with the rest handled through a 60-month auto loan that Karl set up for me through State Farm. The monthly payments are $301, which isnt too bad. When we came out of the office, my MINI was inside the building waiting for me. We did pictures (the dealership has an album of each MINI buyer with their new car), then I drove it out the building and we headed home. I only stalled it once, and ground a gear twice (both times going for third). A lot of people rubbernecked, pointed, and honked. Its cool, and Giles is so fun to drive. Im loving this car!

See All Projects by KarenTKD