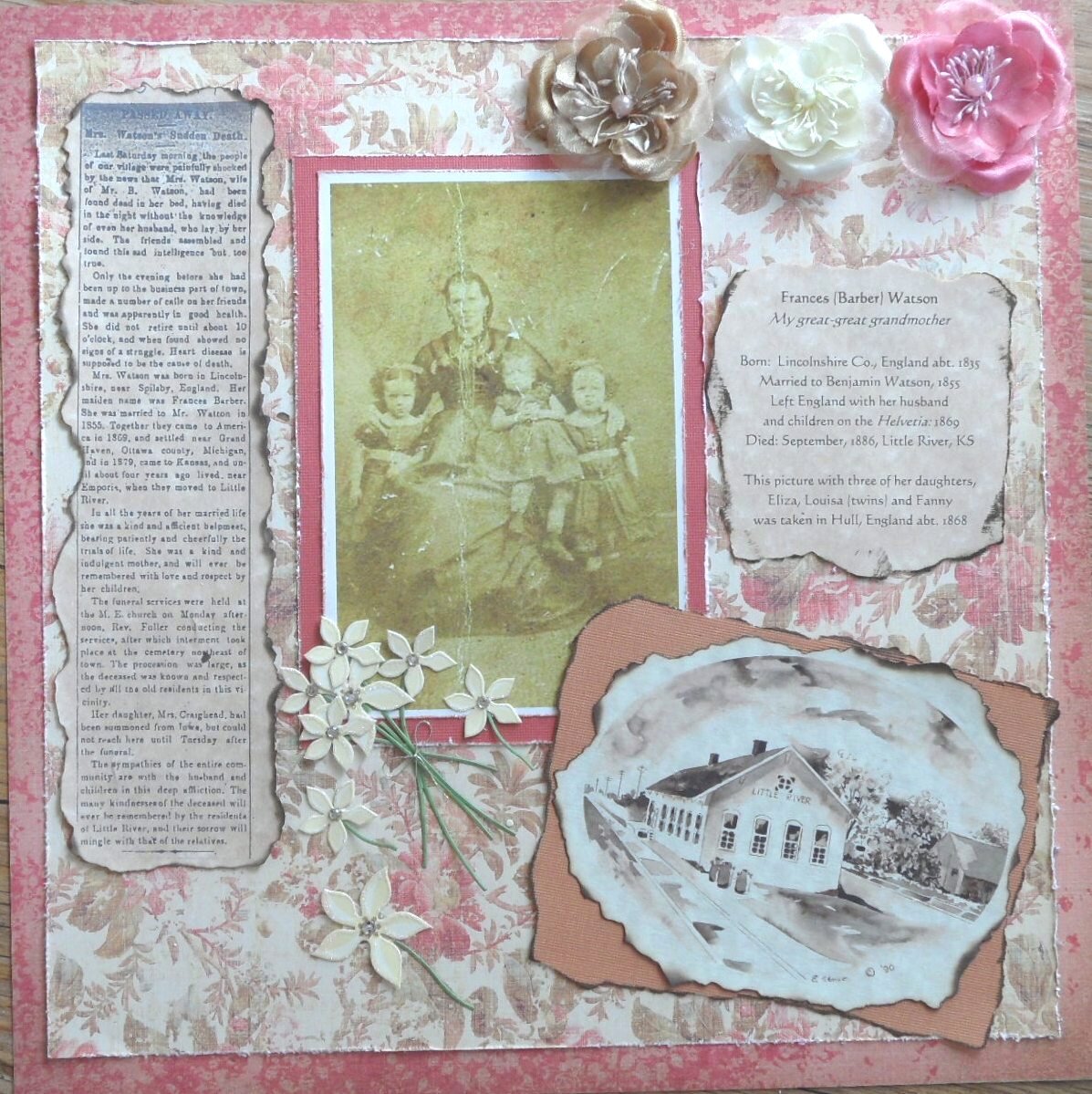 Jedco
December 03, 2012
Very touched by the layout. Thanks for sharing the obituary. A very lovely part of history.

Doberlov
November 13, 2011
What a soft, sweet, strikingly elegant heritage page. Thank you for sharing this beautiful piece of the past with us here.

Autumn Zenith
September 02, 2011
What an amazing tribute! This lo is gorgeous!

Aprilbaby
September 01, 2011
that's awesome that you were able to find and include the obit. Your lo is lovely. the pp, colors and flowers are wonderful and are perfect for the era. another piece of your family's history beautifully preserved.

Happy Go Lucky
August 31, 2011
Wonderful!!! Such a find to have gotten the obit from the historical society, and such a wonderful photograph!!! Beautifully done!!!

Precious310
August 31, 2011
How wonderful to have a photo this old! Now she can be remembered and seen for many generations to come. Beautiful layout!

A picture and obit of yet another 2nd great grandmother. This awesome picture was taken in Hull, England abt. 1868, just before my 2nd great grandparents came to U.S. with 6 children. They ended up in Kansas, and she died there, unexpectedly in 1886. My cousin and I recently took a heritage tour of the area and we got this obit from the Little River Historical Society. The drawing of the Little River train depot was on the front of a card I bought at a local store. The obit is hard to read here, but not so much IRL. Here's a transcription.

Last Saturday morning the people of our village were painfully shocked by the news that Mrs. Watson, wife of Mr. B. Watson, had been found dead in her bed, having died in the night without the knowledge of even her husband, who lay by her side. The friends assembled and found this sad intelligence but too true.
Only the evening before she had been up to the business part of town, made a number of calls on her friends and was apparently in good health. She did not retire until about 10 o'clock, and when found showed no signs of a struggle. Heart disease is supposed to be the cause of death.
Mrs. Watson was born in Lincolnshire, near Spilaby, England. Her maiden name was Frances Barber. She was married to Mr. Watson in 1855. Together they came to America in 1869, and settled near Grand Haven, Ottawa County, Michigan, and in 1879, came to Kansas and until about four years ago lived near Emporia, when they moved to Little River.
In all the years of her married life she was a kind and efficient helpmate, bearing patiently and cheerfully the trials of life. She was a kind and indulgent mother, and will ever be remembered with love and respect by her children.
The funeral services were held at the M.E. church on Monday afternoon, Rev. Fuller conducting the services, after which interment took place at the cemetery northeast of town. The procession was large, as the deceased was known and respected by all the old residents in this vicinity.
Her daughter, Mrs. Craighead, had been summoned from Iowa, but could not reach here until Tuesday after the funeral.
The sympathies of the entire community are with the husband and children in this deep affliction. The many kindnesses of the deceased will ever be remembered by the residents of Little River, and their sorrow will mingle with that of the relatives.
(Sept. 25 1886)

See All Projects by SedonaScrapper