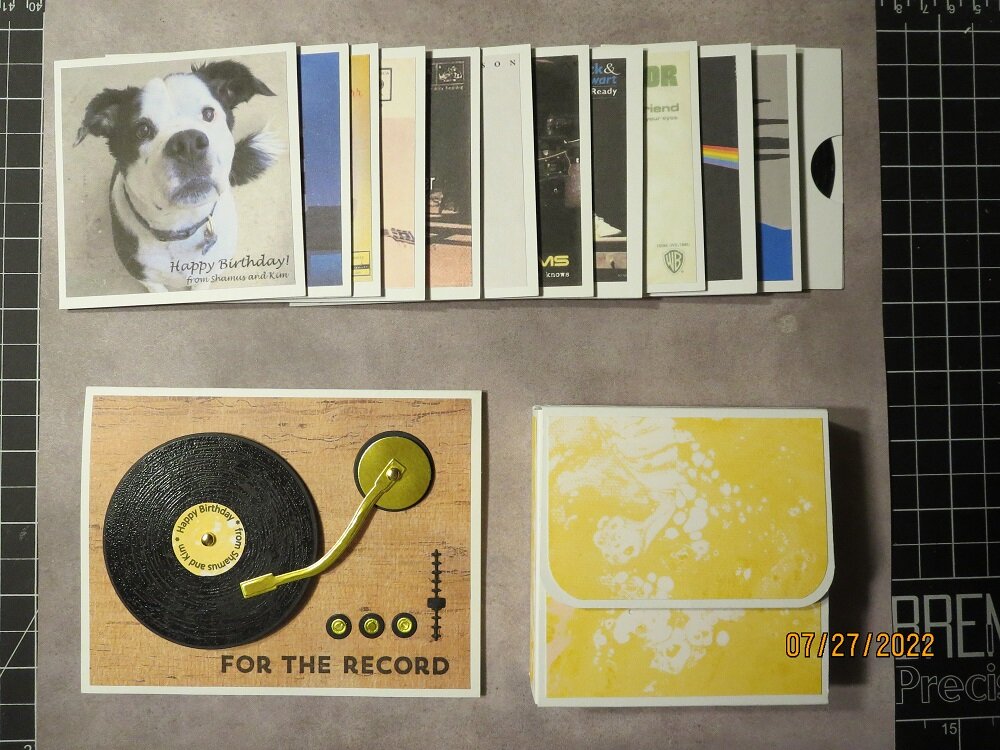 This is so darn cute. Love the woodgrain record player and especially the mini albums. Great job...Carol

This project is soo cool! Youre soo clever. Never was into Pink Floyd. When I was young I wouldnt allow my husband to play their stuff in the house, but now, some of their stuff is ok--Ro

Rolbricht
July 28, 2022
Kimy, this is simply sensational! Your meticulous detail and creative flair make this a very special gift. I am sure it will be treasured for ever! The whole design is amazing, the record player is wonderful, just right to evoke memories of that generation. And to re-create the record covers is just magic! Ohhh, am I right in thinking there is a cover of Pink Floyd in there?!? (My all-time favourite band!) You rocked this and it is a definite all-time favourite of mine!!!!

Well, I know record player cards are probably behind the times by 2 or 3 years, but I had a go at it anyway.

This record player card and album set is for a family member.

I wanted to make a more interactive card with a pull tab to make the record spin, but the one vital piece I needed got itself lost after I bought it to specifically make this card, so I had to settle for the "manual" spin (record does move, just have to move it with one's hand).

I also wanted a set of "records" to go with this card beyond just the Happy Birthday one on the front, so I sent out a request for other family members to please humor me and let me know what their favorite songs/albums were. Oddly enough, the birthday boy was the only one who didn't answer. That's ok, because his record is one that recreates a scenario from 50 years ago when we were kids (something to do with darts and Donnie Osmond). He'll remember, though, when he sees it.

So, yes, I made an "album jacket" and a "record" for each favorite, ended up with a nice dozen. Then I had to make a case to hold them, of course, but that was easy enough. Wish I would have had some 70's/80's bell bottom clad guitarist or something to put on the front of the case. Ah, well.

Stampin' Up! "For The Record" stamp set was used for sentiments and stamping the actual record on black cardstock, which I then clear embossed for the "grooves" to show up. The yellow "pour" paper is also from Stampin' Up! from the Ocean Waves set. (all retired)

I purchased the Honey Bee "Record Player" dies to be able to get the player arm and controls (yes, I was lazy); I won a small door prize type gift certificate from Honey Bee while watching one of their lives, and this was what I got.

The wood grain pattern paper sprang up on my desk when I was cleaning and I thought, "huh, this should work for the player cabinet." I vaguely remember it, but I honestly cannot remember right now where it came from.

I found all the original album cover artwork for the favorite songs that were relayed to me, and scaled them down and printed them out on plain printer paper and then cut them out to glue onto the album jackets I made (hoping none of them bubble up), all with the opening on the right side as was done in the day. I also printed out little tiny center labels for all the records, as I did with the Happy Birthday one on the card front. I didn't want to step into copyright territory, so I didn't show full covers and artists in the picture, though a few could be recognized by music enthusiasts from between 1950 and 1990 just from this glimpse, haha (yes, Pink Floyd fans, we all know who we are). Nonetheless, this is a one-off set for my family member and I won't be making more or selling them. The Happy Birthday album jacket is a pic of my boy, Shamus, so no issue with that one!