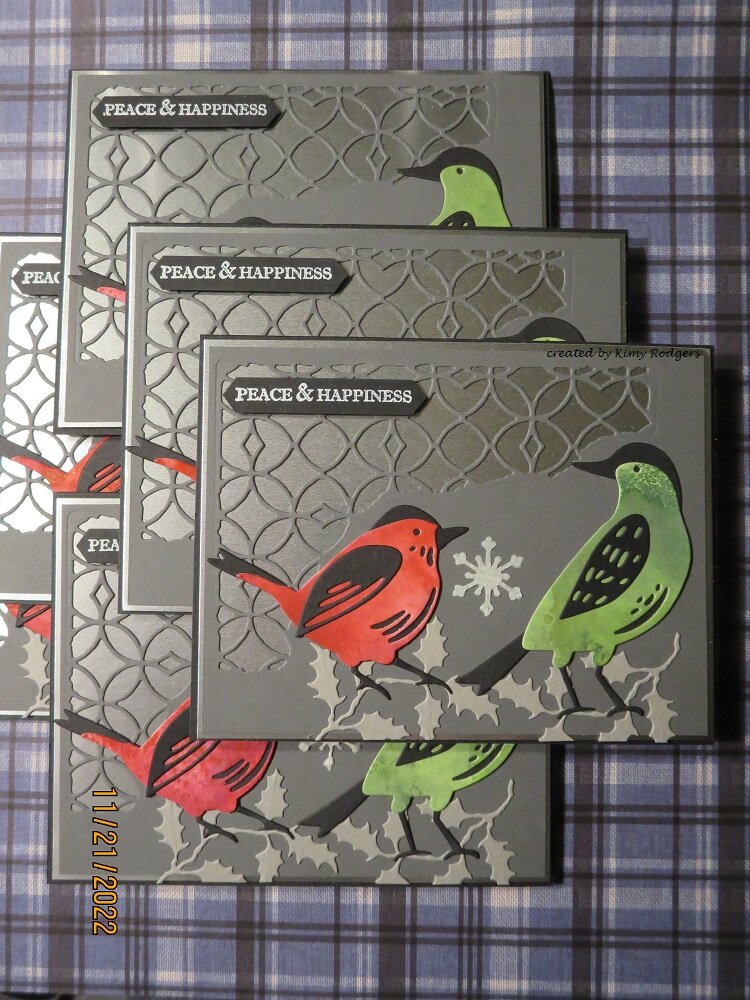 Nice use of the cut out die.

This batch of Christmas cards is definitely stepping outside the norm for me. This is a gray scale design with the only "color" being the two bright Christmas birds as focal on the front. This design developed itself as I went, and was not an idea I started with, except that I wanted to use the birds on a card.

I'd created some panels using the new Tim Holtz Distress color, Lumberjack Plaid, along with some of the holiday mica spray Tart Cranberry. The first try ended up too splotchy for me, but I kept it thinking there must be a use for it. When I sat down to play with the birds, I wanted a black and red bird, and thought maybe I could use that splotchy piece for selectively die cutting the main layer. It worked, and I was happy. Then, I wanted another color for the other bird. I played with blues with Winterfrost and greens with Wicked Elixir mica spay stains. Both colors worked fine, but I chose the green, being I was going to make a Christmas card design of it, with red and green colors being the only "traditional" part for the card.

Then, I decided to go outside of my own box, and chose to go with a black/gray/white card. Totally not me. And, all the pieces - except the birds - would not have blended edges, just the clean cuts. I added the cut-out portion on the front for interest, and then chose to back it with silver foil card.

As I went along and was dry fitting the birds, I realized I needed something extra, because the card design was looking a bit too sparse. Enter the embossing paste single snowflake between the birds. Then, during the next dry fit, I realized these birds needed to have something to perch on instead of just "hovering in air," so to speak, and added the holly die cuts in a shade of light gray.

I wanted a small sentiment, and balanced the front of the card out a little by placing it in the upper left corner, and make it black with white embossing. The insert/inside got this year's sentiment verse also white embossed, along with a small silver snowflake opposite.

It took a little while because I made decisions as I went and as the ideas came to me. I think I'm happy with the outcome, though. I feel like my birds are perched in a holly bush outside a fancy frosted window somewhere. And "Deck the Halls" became stuck and playing in my mind throughout the project.