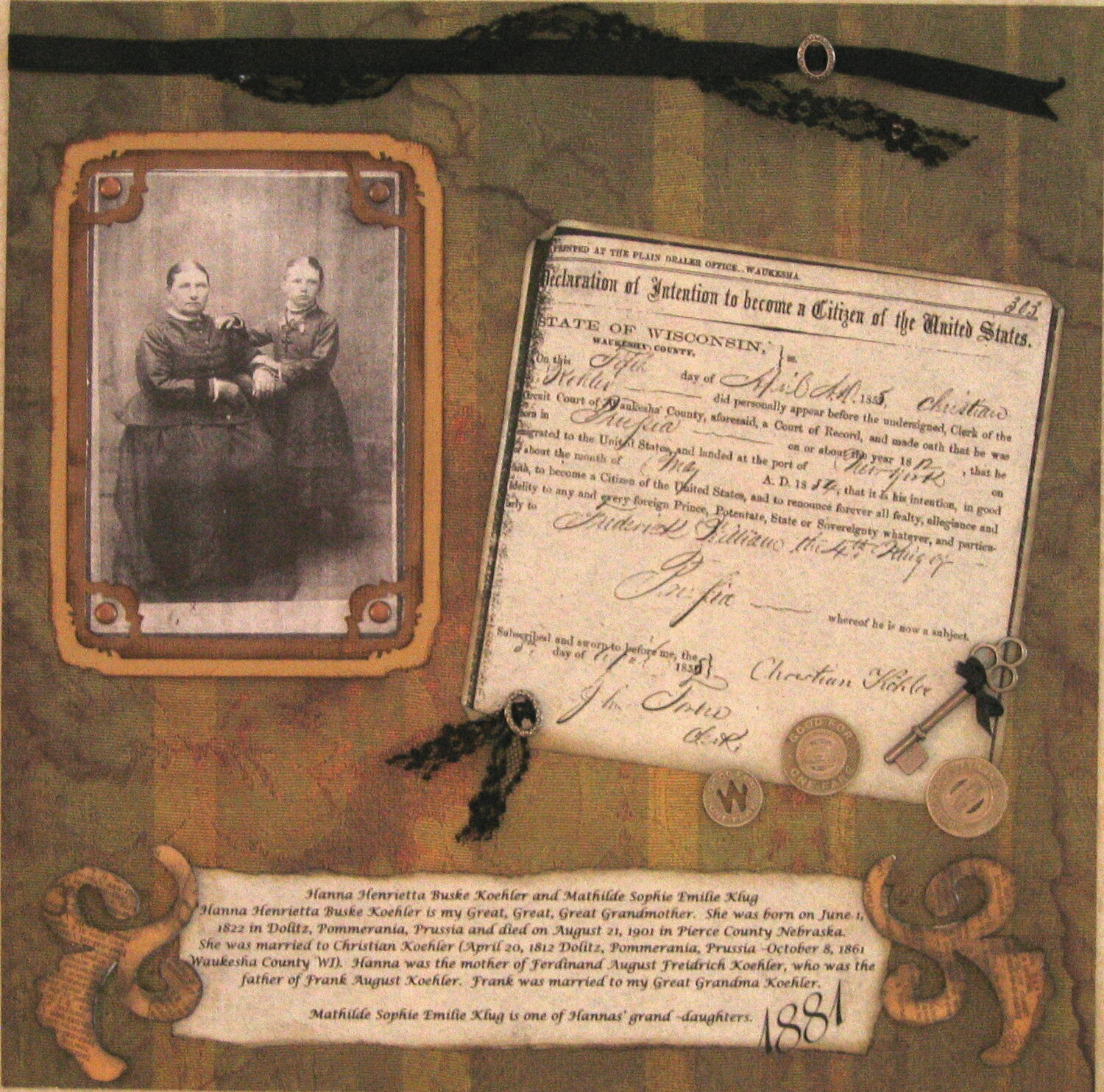 Give a Cheer
beautiful

Unknown
June 25, 2007
Very,very interesting! Love that you have all these wonderful old documents and photos. I love everything about this: ribbon, key, buttons, frame. You are the queen of heritage!!!

Anajul
June 14, 2007
its work is perfect it is digital or manual? Congratulations

Borboletas
June 13, 2007
Love how you added the documents to this layout. Everything looks so great together.

ScrapitDigi
June 13, 2007
Great great heritage page. It's great to have the documents as well as the pics.

Yo Adria
June 07, 2007
Wow, that is awesome you have this kind of documentation. Great LOs

Unknown
June 06, 2007
Your collection of heritage photos amaze me! And you're doing such a wonderful job scrapping them.....a job to truly be proud of! What a heritage album you are compiling! Awesome work!!

Noredust
June 05, 2007
Awesome heritage page! And what a treasure in that document! You truly are preserving your family history!!

Grandma_sue
June 04, 2007
Oh! This is so pretty! I can't wait to see if my dad has any of these kinds of documents. Great lo

OnlyJane
June 04, 2007
This is just beautiful - love everything you did, your choice of embellies and paper were/are fantastic.

OnlyJane
June 04, 2007
Beautiful lo! What a great photo to have and be able to scrap!

The journaling reads: Hanna Henrietta Buske Koehler and Mathilde Sophie Emilie Klug. Hanna Henrietta Buske Koehler is my Great, Great, Great Grandmother. She was born on June 1, 1822 in Dolitz, Pommerania, Prussia and died on August 21, 1901 in Pierce County Nebraska. She was married to Christian Koehler (April 20, 1812 Dolitz, Pommerania, Prussia-October 8, 1861 Waukesha County WI). Hanna was the mother of Ferdinand August Freidrich Koehler, who was the father of Frank August Koehler. Frank was married to my Great Grandma Koehler.

Mathilde Sophie Emilie Klug is one of Hanna's grand-daughters.
The document on the right is a copy of Christians' Declaration of Intention to Become a Citizen of the Unted States. It says: On the Fifth day of April A.D. 1858, Christian Kohler did personally appear before the undersigned, Clerk of the Circuit Court of Waukesha County, aforesaid, a Court of Record, and made oath that he was born in Prussia on or about the year 1812, that he emigrated to the United States and landed at the port of New York on or about the month of May A.D. 1854, that it is his intention, in good faith, to become a Citizen of the United States, and to renounce forever all fealty, allegiance and fidelity to any and every foreign Prince, Potentate, State or Sovereignty whatever, and particularly to Frederick William the 4th, King of Prussia whereof he is now subject.

See All Projects by GrammaScrapper