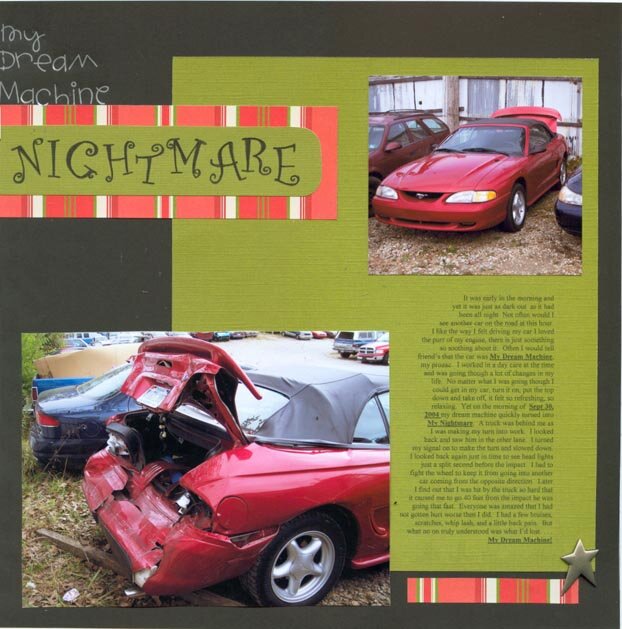 Give a Cheer
makes me wanna weep, and cry and help you get sweet revenge, lol. Can tell it was a sweet ride......

DonnalynneRNC
May 22, 2008
Oh, it was such a beautiful car. This is the body style that started my obsession with mustangs. Oh I hope this doesn't ever happen to mine. I love the LO.

Oldmissb
September 13, 2006
This image was printed from:

It was early in the morning and
yet it was just as dark out as it had
been all night Not often would I
see another car on the road at this hour.
I like the way I felt driving my car I loved
the purr of my engine, there is just something
so soothing about it. Often I would tell
friends that the car was My Dream Machine,
my prozac. I worked in a day care at the time
and was going though a lot of changes in my
life. No matter what I was going though I
could get in my car, turn it on, put the top
down and take off, it felt so refreshing, so
relaxing. Yet on the morning of Sept 30,
2004 my dream machine quickly turned into
My Nightmare. A truck was behind me as
I was making my turn into work. I looked
back and saw him in the other lane. I turned
my signal on to make the turn and slowed down.
I looked back again just in time to see head lights
just a split second before the impact. I had to
fight the wheel to keep it from going into another
car coming from the opposite direction. Later
I find out that I was hit by the truck so hard that
it caused me to go 40 feet from the impact he was
going that fast. Everyone was amazed that I had
not gotten hurt worse then I did. I had a few bruises,
scratches, whip lash, and a little back pain. But
what no on truly understood was what Id lost. . . .
My Dream Machine!

See All Projects by _Tee Tee_