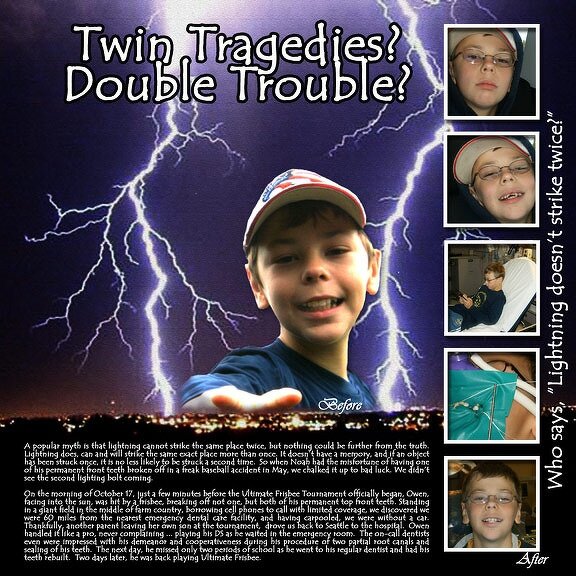 Twin boys, both broke their permanent front teeth in sporting accidents 5 months apartâ¦who expected that?No product used.Text reads:A popular myth is that lightning cannot strike the same place twice, but nothing could be further from the truth. Lightning does, can and will strike the same exact place more than once. It doesn't have a memory, and if an object has been struck once, it is no less likely to be struck a second time. So when Noah had the misfortune of having one of his permanent front teeth broken off in a freak baseball accident in May, we chalked it up to bad luck. We didn't see the second lighting bolt coming. On the morning of October 17, just a few minutes before the Ultimate Frisbee Tournament officially began, Owen, facing into the sun, was hit by a frisbee, breaking off not one, but both of his permanent top front teeth. Standing in a giant field in the middle of farm country, borrowing cell phones to call with limited coverage, we discovered we were 60 miles from the nearest emergency dental care facility, and having carpooled, we were without a car. Thankfully, another parent leaving her own son at the tournament, drove us back to Seattle to the hospital. Owen handled it like a pro, never complaining â¦ playing his DS as he waited in the emergency room. The on-call dentists even were impressed with his demeanor and cooperativeness during his procedure of two partial root canals and sealing of his teeth. The next day, he missed only two periods of school as he went to his regular dentist and had his teeth rebuilt. Two days later, he was back playing Ultimate Frisbee.

See All Projects by Debikins