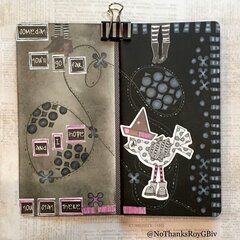 You'll have "sew" much fun with the Stitch It Dylusions Dyalog Stencil by Dyan Reaveley for Ranger Ink. The package includes one reusable stencil that measures 9.25" x 8.25".