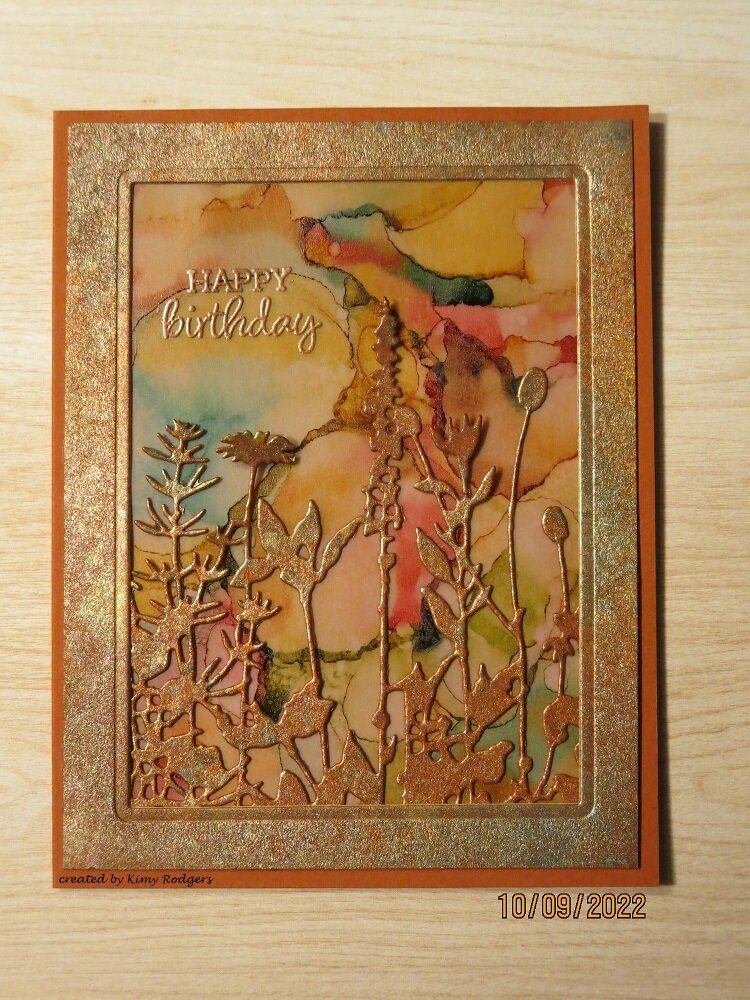 Give a Cheer
Oh my, this is stunning. Sorry I missed it earlier.

this is simply gorgeous. It's funny that you'd call it "so bright" and I thought it's so gorgeous for being muted. Lovely job. Great creativity.

Oh WOW! This is FABULOUS! And its goin into my favorites--Ro

This is the card that wasn't supposed to be, but came through in a pinch.

The card I was trying to create included an architectural stamp element and was going to have some texture paste design elements. Well, I waited until the last minute to play around, and found that wasn't happening. So, plans changed.

This card uses a dye and alcohol panel I created on vellum a little while back, and I used the more vibrant and "in your face" side instead of the reverse that would mute the "scene" and colors. I'd stashed it away for maybe using for die cuts, but it became the focal piece here, instead. Dye pad reinkers were used, and then moved with alcohol. Not my favorite method, and I ended up using a lot more of my reinkers in the process than I wanted, so I decided in the future to stick with alcohol markers for this effect. It is pretty bright, though.

The frame of the card is another piece I'd created with Tim Holtz seasonal mica stains, and used Strathmore hot press watercolor paper. Of all the papers I'd experimented with, this one actually seemed to take all the inks and spraying the best. Surprisingly, though, the paper cardstock of the base was the color and paper I'd used for my Myron the squirmy little bug eater card last time. It also held up rather well, and I was surprised.

I had another cutout of the Tim Holtz Flower Field die from one of those experiments, so decided to use it, too. I glued it to the inside of my frame before gluing the vellum panel behind it. Having a frame to glue for the vellum is nice, don't have to panic and try to find a spot on the panel where glue won't show through.

Side note, I ordered a precision plate for my Big Shot, as I've been having some difficulties with cutting some of my pieces, and my machine seems to be chugging a little now. Fortunately, I have other machines as backup.

I used a Spellbinders die to cut the front aperture, and it creates a matted look to the frame. It took me a while to figure out it was *meant* to do that when I first started card making.

I embossed my sentiment directly onto the vellum panel, another "whew" when it worked and was placed properly. I used copper embossing powder, after testing black, gold, platinum and a few others before finally landing on copper as the best result on the scraps I tried them on.

Inside, I just used the last scrap of this sprayed paper to put at the bottom and die cut another element from some gold texture metallic paper I have.

Not giving up on the original idea for what was to have been for this card, I'll have it for next year when I get it all figured out just right.